The Ghosts Of Althorp House 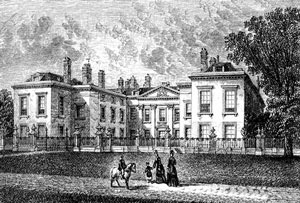 August 31st 2008 will mark the 11th anniversary of the tragic death of Diana, Princess of Wales. She was the people's princess, and yes, Canada's very own princess. Before anyone should ask, the answer is no, we do not have any credible reports of her spirit haunting, and if we did we would not write about it. Quite frankly it is still too soon and far too fresh for those who knew and loved her.

To commemorate her life I have chosen to write about one of her childhood homes and the Princess' final resting place, and where some of her long passed, and esteemed ancestors are still said to haunt.

Althorp House and Estate in Northampton has been the home of the Spencer family since the 15th century.Surely a house that has seen so many generations of the same family, and has been the scene of so many historic events ... surely must contain echoes of it's own past .. surely it must be haunted ... and it is.

The first reported haunting at Althorp occurred in the early 19th century.

A guest of Lord Lyttelton, (son-in-law of George John, the 2nd Earl of Spencer) by the name of Mr Drury (later to become Archdecon) had stayed up late playing billiards with his host. Upon getting ready to retire for the evening he was given a strong warning to extinguish all lights before falling asleep. The Earl was very safety minded and concerned about any fires breaking out in the house.

Sometime later he was rudely awakened by a very bright light that was shining upon his face. Still semi-awake he looked up to see the source of the light. Standing at the foot of the bed was a man dressed in a striped shirt, and cap. The intruder held up a lantern in one hand.

Sitting upright Drury demanded of the stranger to explain what he was doing. His question was met with complete silence. Becoming irritated the clergyman continued to ask questions and continued to receive the same lack of response. Slowly the figure lowered the lantern and began walking away towards the dressing room. Angry now, Mr Drury yelled after the man that there was no exit from that direction and that he intended to complain to the Earl himself in the morning .... turning over Drury went back to sleep.....

True to his word the house guest mentioned the previous evening's incident to Sarah Lyttelton, daughter of the Earl. Mr Drury had thought the man obviously drunk, though not exactly drunken in appearance.

Sarah replied that he must have encountered her Father's favourite and most trusted groom. The groom had been asked by the Earl to check on each room and extinguish all lights in case any guests ever fell asleep with one still burning. These had been part of his duties. At least they had been prior to his death ... exactly a fortnight prior to Mr. Drury's encounter with him!

Just prior to World War One the apparition of a young child was reported in the house's long picture gallery. One of the Spencer daughters who also frequented this room would see the young girl dressed in grey pre-Victorian era clothing near what was known as "the little door." A doorway so small it would only comfortably permit a child. The young Spencer girl never felt threatened, but knew instinctively that this other child did not belong in her "current reality." Perhaps she had been another Spencer daughter from a much earlier date? Though, the ghostly child's likeness was never found in any of the family's numerous portraits. The apparition reportedly never spoke ... only smiled ... and then would disappear ... 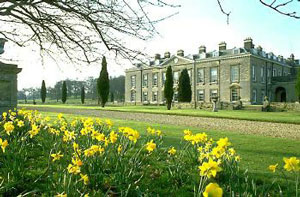 Althrop House as it appears today

Albert Edward John, 7th Earl of Spencer (Princess Diana's grandfather) passed away in 1975. Jack as he was known to family and close friends was a shy and intelligent man who had a great love and devotion for Althorp. The house and it's many historical treasures were a keen passion for him. The Earl became an acknowledged expert on it's history and artefacts and served on numerous artistic and antiquarian boards including the Victoria and Albert Museum.

Soon after Jack's passing his apparition was seen by both Spencer family members and employees of the estate. At one time the wife of the butler was so startled to see her late employer that she called out, "How nice to see you my Lord." So real did he appear that she had forgotten he was dead.

Althorp is a beautiful and peaceful country manor ... loved and cared for by the many generations of the Spencer family that have lived there.

It is not surprising that those who reportedly haunt Althorp seemingly do so because of a deep sense of duty and/or great affection for this lovely house.