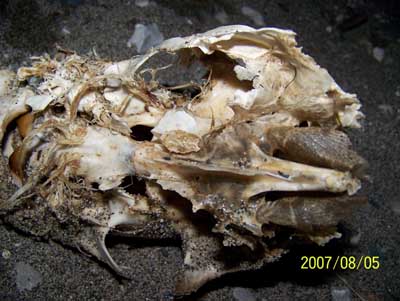 The author and investigator then contacted a Marine Biologist at an Ontario university and asked her what her professional option was on the images. She replied the following,

“After looking at the image, I would take a fair guess for it to be a livestock animal or possibly a deer. The pictures don't give the greatest resolution for me to make a proper guess and the photos of the skull have not been taken at various angles. The picture you sent shows the underside of the skull with the back of the head the furthest away from the spine (Meaning that it has been turned around backwards and is upside down), which is probably why you were questioning its appearance. To make a good guess at the origin of the skull, I would need to see the front end (where the teeth would be) and the top view of the skull”. If you wanted to do further research, I would consider looking into it being a deer, alpaca, young moose, young llama, etc... It doesn't appear to be a predator because the orbitals are located on the side of the head.” The Marine Biologist’s name will not be made public based on a request from her, but it can be provided to PSICAN staff, if requested.

At about the same time, Mr Matt Butler a professional photographer with Extreme Imaging in Barrie, ON examined the images. He felt the images were authentic and felt the thing in the images had a long looking neck but he could not conclusively say what type of creature it might be.

Next, I contacted a resident of Manitoulin Island, Mr Glenn Black who resides near the site where images of skeleton were taken and asked him to search the beach to see, if he could locate anything.

My description to Mr Black was as follows, “You are searching for a skeleton of approximately 3 to 5 feet in length. Also, the ribs are shaped very wide, long, and are close together indicating a narrow girth, not small, but narrow like the design of a fish. The animal also has a very long neck.

This animal was too large to be a dog due to the sheer length of the neck, the rib formation, and the orbital sockets in the skull are very large and not proportional to a canine, deer, or any other type of fish or aquatic animal found in that region. There was evidence that the creature had no legs at all (front or hind). It's back end was totally missing.

Mr Black searched the beach area and reported back the following to the author/investigator, “I went to the ProvBay docks with my wife. We did a grid search pattern over the entire sand and stoney beach area, approx 250 yards along East side of beach from Prov Bay dock, up to start of sheet rock and 25 yards beyond. We found numerous crab legs, shells, bone from a chicken wing (Col. Saunders ?), and 2 fish vertabrae and rib bones, but nothing like what you have pictured. We also searched the West side in case directions were garbled, for another 200 yards. I scanned the water to the gravel trough (approx 3 ft out in the water, in case a storm had washed it out. Nothing. Sorry. Your pictures appear to me to be a dead faun (baby deer), caught while drinking, by a wolf ???.”

In conclusion, after many hours of investigation and with the assistance of several other people, a Marine Biologist, a professional photographer and a Manitoulin Island the author/investigator feels that without having the skeleton of the creature, it is difficult to determine whether it was a yet to be discovered aquatic life form or a baby deer, a alpaca, a young moose or possibly a young llama. This concludes this investigation unless the skeleton of this animal is located.