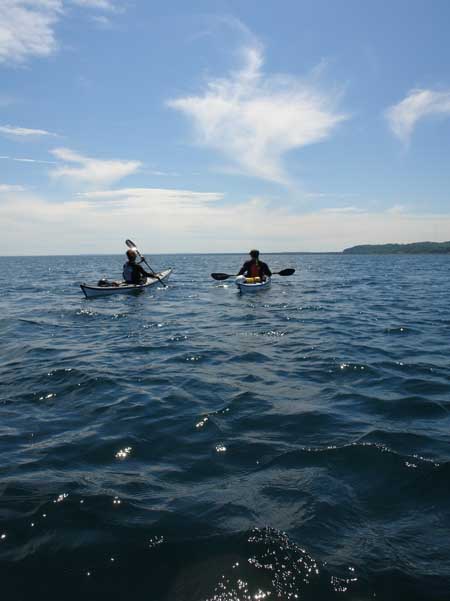 We were contacted in July 2014 by Greg Peterson in regards to a odd photo and experience he and a fellow kayaker had in 2008 on Lake Superior. We consulted with Stephen Turnbull at the University of New Brunswick who stated "I can't really make out anything in the photos with the kayakers." We also asked about recent reports of sharks in the area, and he answered "In terms of the shark, that is part of the hoax I believe that was originally set up as part of shark week promo and no sharks can exist in Lake Superior, not even the bull shark as it could not really acclimate to the colder temps up in the area."

Greg has kindly allowed us to share his photos and report he made in 2008. We have the original high res versions as well as video. We'll let you make up your mind. Glare or something else. 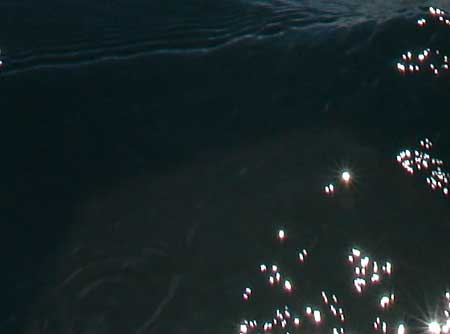 "Look at the bottom center of this imagine that I took in July 2008 but did not notice until this past week (August 16, 2008) as it was among about 100 photos taken that day. This high resolution photo is followed by a closeup of the portion in question. The photo has not been altered in any way. It was taken while doing a story on kayakers who are circumnavigating Lake Superior this summer.

One expert says its nothing more than glare - though that would mean glare on top of glare.

It is not a rock and was taken about 1 mile offshore from the Marquette harbour.

If it is "glare" it sure is strange.

It was taken off the side of my small 14-foot boat with camera held near water level. I was using a silent electric motor.

What do you think?  "Glare" or something else?"

To add to the mysterious fun - myself and a passenger did feel an unexpected and strong bump - but I have no idea if it was about the same time as this photo was taken. It was weird. There were no objects in the water that would bump the boat - like a log.

The other passenger is a photographer for a local newspaper (that I also once worked for). 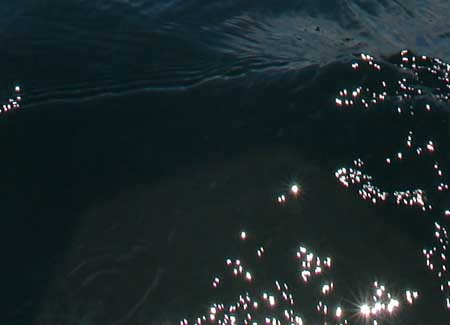 This is closeup of the image at the very bottom center of the above photo."

Our thanks goes out to Greg for providing us with his experience, and photos.  If you have experienced something similar, or have encountered something that you believe may be a cryptid please contact us at admin@psican.org Your privacy will be protected and confidentiality is assured.