I'm sorry, you wanted me to have an OPEN mind? Hmmm... 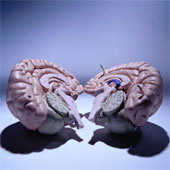 Many people in all areas of the paranormal claim things just won't happen or won't be experienced unless the witness of the events has an "open mind". There is some truth to that because I hope we all know that the human brain does have a perception filter nicely built in that occasionally does filter out things we probably don't need to concern ourselves with too much... like a stray dust particle flying into our face, an ant under foot during a long stroll, or a multitude of other like things... basically, our brain might acknowledge their existence, but then banishes the importance of the event as not needing to be given too much strength in our day to day life.

Now, what if (from the corner of your eye,) you "saw" something odd... but when you re-examined where it was supposed to be, nothing was there? Would you spend days or hours being overly concerned about that? Nope... your brain knows it's not that important.

So, in this instance, keeping an open mind means to be keeping your brain from not excluding what it feels is not important.

Problem is, this is most definitely not what so many people mean when they accuse others of not owning those minds which are ever so open... and we've seen this, as I'm sure you have, all too many times.

The overly credulous... those "too-true believers" out there accuse anyone who doubts something of not having an open mind...

Conversely, the so-called sceptics (not REAL sceptics)... the "non-believers" accuse anyone who refuses to budge from their faith as not having an open mind...

So which is it?

The answer is that the definition of open mind changes with whoever is accusing their opposite of not having one. In other words, an open mind may not actually exist... as such.

In other words, don't take belief or disbelief on faith alone... but question (quite literally) everything and although there's nothing wrong with faith in things, you must discern what is absolute empirical fact from what is what is faith only.

So, the next time you see a light in the sky and say, That's just a satellite probably. and somebody near you says you need to keep an "open mind"... remind them you are... open to all possibilities... which means, you're open to it likely being just a satellite. Next time you are shown a picture of a rainstorm and see absolutely nothing and are told there are faces in the clouds looking down... but you'll only see them with an "open mind"... think to yourself... is that person keeping an open mind, or closing themselves off to more normal explanations so that they can slide back onto more "paranormal" answers for proof of their faith?

It does go both ways though... if someone tells you that the sighting of a ghost in a location is just a hallucination... and seven people have seen that ghost at different times without knowing about previous sightings... that's some hallucination... being able to copy itself for so many people at different times... that's some coincidences... or is it the lack of an open mind on the part of someone grasping at a "normal" answer to something that may not have an easy answer?

The point of this article is that a truly open mind is open to all possibilities... both for and against certain explanations... and that "open" and "absolute belief/faith" and "open" and "scientific observation" are not mutually exclusive...

Sometimes, some of the people that claim others do not have open minds are just as closed as they assume their opposite number to be.