On the night of October 4, 1967, officers of the Royal Canadian Mounted Police (RCMP) and six civilians witnessed an incredible, yet unexplainable, sight. Earlier in the evening, the RCMP had received many phone calls from residents reporting that an airplane had crashed into Shag Harbour. Both the RCMP and locals had rushed to the shore of the harbour, but what they encountered there was far from a conventional aircraft.

Witnesses reported seeing an object 60 feet in length moving in an easterly direction before it descended rapidly into the water, making a bright splash on impact. A single white light appeared on the surface of the water for a short period of time. The RCMP, with help from local fishermen and their boats, endeavoured to reach the object before it sank completely.

Local fishermen remember travelling through thick, glittery, yellow foam to get to where they saw the object. Bubbles from underneath the surface of the water appeared around the boats. The crews attempted to search the area for evidence of survivors, but found no one.

The Department of National Defence (DND) conducted an underwater search of the area, but failed to locate any evidence of an object.

The crashing of the unidentified flying object into Shag Harbour is still discussed today, with many articles appearing on the Internet. There is no trace of the RCMP reports of this sighting in the files. The Department of National Defence has identified this sighting as unsolved, and the only documentation that exists in the files is a DND memo. 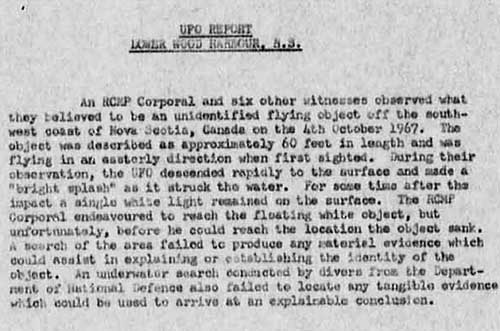