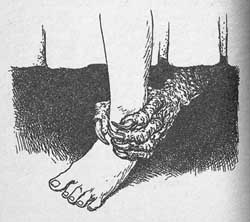 "My encounter began when I was in grade 4 and lasted close to two weeks. Maybe you can tell me if this is true or not, but I've had some folks tell me that people who are the most religious are often the ones who are most susceptible to an invasion of something other-worldly. So I'm not sure if this has anything to do with my experience or not, but as a child I was very religious (R.C.). I had two crucifixes hung on my bedroom wall with palm beads that were blessed by a priest. My faith could not be shaken, and I prayed every night and always tried my hardest to be "good" and follow the teachings of Jesus Christ. I got teased for it a little bit at school, but overall I was always known as the nice, quiet, religious one.

Anyway, by the time Grade 4 came around, something strange began to happen. I was always a sound sleeper, and never woke up during the evening. But on the first night with my encounter with something other-worldly, I immediately woke up around 3AM or so. It was strange because my eyes would open wide, and I wouldn't be tired. I just laid in my bed starting at my alarm clock wondering why I was awake so early. Not long after being awake, I felt something scratch my head. It lasted about five seconds or so. It felt like a finger scratching my head. I thought I must have dreamed it, or maybe that I was moving my head against my bedpost or something. The last thing I thought was that there really was a finger scratching my head in the middle of the night, so I brushed it away and tried not to think about it the next day.

The problem is that every night for about 10 or 11 nights or so, the same thing happened. I would always wake up sometime between 230am and 330am (sometimes a little after 4am) out of the blue for no rhyme or reason. After the second or third night, I remember thinking that I should probably try and stay awake so that I could be sure I wasn't going crazy. But I always wound up falling asleep. I made a pact with myself that the next time I woke up out of the blue during the evening like this, I would begin to pinch and scratch myself to make sure I was really awake and that my head wasn't moving against my bedpost. But the only thing that did was scare me more because it still happened. I can still remember waking up, immediately scratching and pinching myself on my arms (I'd pinch myself on the back of the arm because I knew it hurt really bad and I would definitely wake up) waiting for the scratch to happen. The scratch became harder each night, and always on the head. I would go to school the next day with red arms because I had been pinching and scratching so much. I also made sure to concentrate and make sure that my head was not moving and rubbing against the bedpost. I would stare at my alarm clock to make sure my head wasn't moving when the scratching would occur, but the numbers showing up on my alarm clock never moved an inch, so I knew my head wasn't moving.

The next few nights I thought to myself that it wasn't going to stop unless I catch it. I didn't know how to tell my parents about my experience. I just didn't have the vocabulary.

As soon as I would wake up during the middle of the night, I did my usual pinching and scratching to make sure I was really awake. I would wait for usually about 30 seconds to a minute and sure enough, the scratching began. I wanted to lay still and bring my right arm around to grab the finger so bad, but I was also terrified. For a few nights I would try and grab the finger, but only after I knew it was almost done scratching my head, so I would always miss it. I guess subconsciously I was afraid of what would happen if I caught it, so although I "tried" to catch it, I never tried to grab it when it first began scratching for fear of what it would mean.

On the last night, I knew I had to really catch it this time. The scratching had been getting harder, and I was more convinced now than ever before that I was dealing with something not of this world. I didn't know what it was, but I knew it didn't "feel nice" or "holy" or "good" like the things I always tried so hard to be and surround myself with. All day I had psyched myself up to really catch this thing. So I went to bed that evening, and woke up early in the morning like I had for the past week or so. Sure enough, it started to scratch my head, hard. This time, as soon as it started, I immediately reached behind my head and caught it. I knew I caught a finger because as soon as I grabbed it, it straighten out and stopped scratching. The second I knew I had a finger in my hand, I immediately turned around and sat up in my bed to see what this thing was. It was too dark for me to see, but there was something darker than the colour black that started to rise or stand up. I couldn't make out any features or anything, I just knew it was rising. I let go of the finger screaming my head off and dove into my parents bed crying and screaming louder.

They didn't believe me that I had something under my bed. My father came in and checked but there was nothing there.

It never came back after that.

As a child I couldn't figure out why, if I was so in-tune with God (at least I felt like I was at the time), how something like this could have happened.  I've wondered about what this was for years, and only now am I actively seeking out answers because I feel like I just need to know.

Anyway, I know you have no reason to believe my experience anymore than any of the others you likely receive through your website. But I'm quite certain that I'm not crazy and I know what I felt. In fact, I've tried to be a skeptic for years, but the one thing always stopping me was my experience. I just couldn't rule out that something else exists.

Thanks for reading this."

Our thanks go out to the witness who shared this childhood experience while growing up in New Brunswick with us. It takes a lot of courage to do so. If you have had a similar experience we would like to hear from you. Please contact us at admid@psican.org Your privacy will be protected and confidentiality is assured.