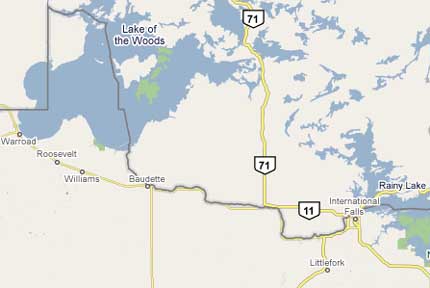 The following report of strange mystery lights was sent in to us in 2009. The event as described below occurred near the Township of Morley (Stratton), Ontario in October 2007. The map posted above is of the general area. The witness writes:

"I have a property in north-western Ontario, and no-one has lived on it for about 40 years. When my mother passed away, I told my family that, if it were possible, I would like to go and take a look at it. My husband and two daughters were working, and it would be difficult to get the time off, and my other daughter was home with a small toddler, and expected another child. My oldest daughters' husband said he would like to see just what sort of a mess it was in too, and offered to go with me.

It's about a 12 hr. drive, with just the two of us, and minimal stops, so it was late when we got to the road that leads to the half-section of the property. Much of the ground is low, and the road has not been kept up, so we decided that we would have some sleep, and proceed down the line road in daylight.

The best area for stopping is on a sort of turn out. The area is high, the parking place is sandy, and is on the highest part of the line road. Underlying the sand is rock. The time of year was mid-October, so I believe any sort of "swamp gas" is ruled out.

We stopped in this lay-by, had a bite to eat, tended to bathroom, etc. My son-in-law took the front seat (he's shorter) and I curled up in the back.

As we lay there both our heads were towards the passenger side of the car. It was a bright night, and we were admiring the stars,etc. as you don't get that kind of a night sky in the city where we live.

I noticed a tree right outside the car window- right in front of our faces, you could say. I said that I hadn't noticed that we were that close to the trees, my son-in-law said that he "didn't know we were, must have missed it- it wasn't all that big"."Looks like a birch that is shedding all its bark"."I didn't notice that it was windy, but the tree bark is waving, see?" "Look at the stars in the branches" "In pairs?" Look, it has pairs of lights down near the ground, but they're red"

We both watched this thing for a few seconds, then Jer said "I'm not looking at that thing anymore" and covered his head with the blanket. I watched it for a long while - or it seemed like quite a while.

It looked like a tangly birch tree, with long white strips hanging from it. What I first took to be stars through the branches, were on a longer inspection, IN the branches, in pairs. There were pairs of these bright little lights near the ground, but red. It fluttered about 3 ft. from the side of the car.

Needless to say. we locked the car doors. I finally fell asleep watching this thing.

In the morning, we looked for the tree. The nearest trees were at least 15 feet away, and, on the sandy ground by the passenger side of the car, apart from the tire tracks (ours, one set) there were no marks at all. It had been a beautiful night, with a bit of moonlight, and no wind to speak of. My son-in-law said that he had been too tired to find another safe place to park the night before or he would have looked for one, and then would not speculate on what we had seen. We had intended to sort of camp out for a day or so, and maybe make our way into the property, but we wound up just doing a short look-around, then going home.


What on earth could it have been? And why?"

When we first received this report we ruled out any sort of swamp gas as the ground temperature would have been too cold at that time of year. I sent the witness a series of photos of fireflies that can appear a dull red colour, and do live (certain kinds) in tree bark. I also asked the witness if they could provide a description of lights size.

From our further correspondence:

"If you could get dimes to glow brightly in pairs about 3 inches to 6 inches apart, you would have an idea of their size. Some would be bright quarters, maybe 8 inches apart. Near the base (roots?) the redder ones were smaller, and closer together. They don't look anything like fireflies- I have bottled those guys in my time, and they have a softer glow.

This was north-east of Stratton, Ontario. Heavy woods. Very quiet. A fairly bright night. I have looked and looked, and asked questions, but no-one seems to know anything about a thing like this, or even what it might be called. I hear lots of stories (I was a complete sceptic) about ghosts and such-which I don't believe in, but this thing has me absolutely baffled. If it were raining, it could be reflections from somewhere, if there were marks near where we parked, I would say someone was playing tricks.

You are a last resort- It bothers me that there was something like this, and I don't even know what you call it. We did watch it for at least 20 min.(my son-in-law) to 40 min. (me) before we gave up."

My initial reaction is to think this is some odd, perhaps very rare natural phenomenon. The red lights are only part of what is being reported as the "tree" that they were surrounding was not located, nor visible in the daylight either.  If anyone has had a similar experience, heard of something similar, or would like to take a good guess at what they saw please contact Sue St Clair at sue@psican.org I will pass along any info to the witness, and your own information will be kept private, and confidential.

Our thanks to the witness for this report. Any future updates on this report will be posted to this page.

Share on Tumblr
Category: Events That Do Not Fit Specific Categories
paranormal , Canada