"We've had our second sighting at the same beach crazy enough. It happened at at about 8:10pm September 6th 2014. We sat on the beach this time, precautions we take since our last encounter. We spotted it rise from Texada Island (on the mountains) like a normal plane at first, then we took notice of it's different shape and light scheme. It was typical UFO shape, amazingly enough. Disk shaped with a bubble above it, large enough to be seen from across the ocean. It flashed fasted than anything we've ever saw, red, white and green. It was like a probe light, but then it began to disappear and reappear farther away in between flashes. It stayed low and did an abrupt turn back to its original and previous location. Then, while we watched so carefully with our eyes, it completely disappeared. We waited for about 10 minutes, continuously walking closer and closer to the exit from the beach. Then, right when we reached the exit, it reappeared, with a trail behind it, very high in the sky, but lower then a plane would fly. going faster than ever. We took pictures and ran for it, as it came our way. We ran back up the road, to which we sighted again and took another picture. Finally reaching the driveway, my friend took her final picture of our view of it from the end of the driveway. I am sort of think it followed us."


Our thanks goes out to the witness for sharing this experience with us. If you have seen something similar at this date/time/location, can add further information to this report, or have experienced something that you believe may be a UFO in the province of Ontario, Canada please contact us at admin@psican.org or fill out our reporting form Your privacy will be protected and confidentiality is assured.

Photo sent in below. Appears to show a contrail as noted above in the report, but not the object in question. 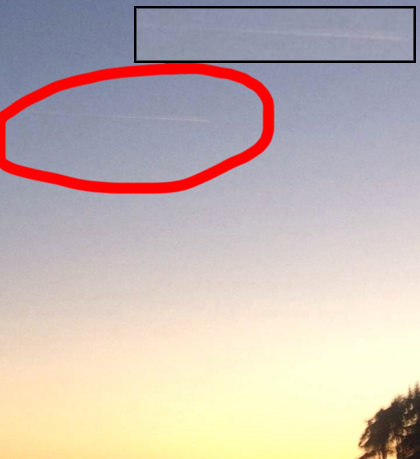 Note the box within the image is a larger version of the original that we included.